For its plans for the 2023-2027 subsidy period, Toneelhuis received a negative evaluation from the advisory committee. Toneelhuis is very well aware of the impact this could have on its artistic activities and personnel.  The Board of Directors has carefully analysed the situation and is assuming responsibility for it.

Both the General Manager and the Artistic Director have announced that they can no longer fulfil their functions. The Board of Directors has appointed Koen Roofthooft as interim business manager. Furthermore, the five theatre makers comprising the new core artistic team – Olympique Dramatique, FC Bergman, Lisaboa Houbrechts, Gorges Ocloo and Benjamin Abel Meirhaeghe – collectively will take on the artistic direction in the interim. They have the full confidence of the entire company.

Toneelhuis believes 100 percent in its artists and in the expertise of its personnel. It wants to continue to play an important role in the local, national and international arts scene. The Board of Directors wants to take action to ensure the future of this company. Because there is much to defend.

STATEMENTS FOR THE PRESS

Jan Rombouts, Chair of the Toneelhuis Board of Directors:

The plans submitted by Toneelhuis for the 2023-2027 subsidy period received a negative evaluation from the advisory committee. Understandably, this was extremely upsetting for the management, the artists, the Toneelhuis personnel and our audience. The Board of Directors takes the situation very seriously, for the activities and the future of Toneelhuis are very important to us.

The Board of Directors has analysed the situation with all due calm. As of yet, the official evaluation of the subsidy plans has not been made; that is only expected to happen at the end of June. But that does not mean that we will do nothing until then. On the contrary, we are shouldering our responsibilities and doing everything we can to safeguard the future of this company. And doing that in concert with all of the theatre makers and personnel.

Both the general manager and the artistic director have announced that they can no longer fulfil their functions. As the Board of Directors we can only respect this announcement. For the period of their absence, we have appointed Koen Roofthooft as acting business manager. Koen is the Head of Planning and Production and has worked for almost two decades at Toneelhuis. He knows the company’s internal operations and financial situation better than anyone and has the complete confidence of Toneelhuis and the Board of Directors. He will report to us in the coming weeks. Furthermore, the five theatre makers comprising the future core artistic team – Olympique Dramatique, FC Bergman, Lisaboa Houbrechts, Gorges Ocloo and Benjamin Abel Meirhaeghe – collectively will take on the artistic direction in the interim. Together with the Board of Directors and the acting business manager, the Toneelhuis theatre makers are doing everything possible to safeguard the future of this company. For every step we take, we will maintain transparent communications with the works council and personnel by means of regular dialogues.

We cannot make any definitive statements about the future today. But as the Toneelhuis Board of Directors we highly appreciate the tremendous dedication with which so many people have made this a wonderful theatre company that is renowned far beyond our national borders. We ask everyone, including the government, to have confidence in the incredible strength of this company. As the Board of Directors, our only interest is to enable its artistic splendour to thrive in the short and long term, under optimum working conditions for all of its personnel.

Toneelhuis personnel from every department stand behind us. Not as a silent mass, but as involved colleagues who actively want to declare their support. During the social dialogue, the Board of Directors and I told their representatives that all of the social dialogue rules will be respected and that they will be involved as full partners in the story of the future of this company. This means that we will communicate with them in a transparent, clear and timely manner. The unions have informed us that they stand behind the interim management in this situation. They have committed themselves to focussing on prospects for the company, and for the personnel in particular.

1. We are in a crisis but feel united

There’s no denying it. Dark clouds are hanging over the biggest municipal theatre company in Flanders. Over our Toneelhuis.
In the past few weeks, the negative preliminary assessment has thoroughly upset everyone in the company. Not only are our artistic activities in danger, but also the jobs of 70 full-time and at least as many part-time employees. For Toneelhuis is not just its well-known faces, but also the many dozens of often invisible employees who, day in and day out, give the best of themselves in order to enable the artists, actors, singers, dancers, performers ... to shine: from the communications department to the set and costume studios, from the administration to the technical department, from the educational department to the box office. Their ernestness, dedication, skill and professionalism make Toneelhuis one of the most special places to work in Flanders. They give us the strength to tackle this crisis together.

2. We continue to believe in the artistic core of the project.

We take seriously the comments and observations made by the advisory committee in their preliminary evaluation. But we are not daunted, even though the evaluation is harsh. There is too much to defend. A number of the negative comments have leaked to the press in the past weeks. In turn, we want to leak a passage from that same preliminary evaluation:
I quote:
“Toneelhuis puts the emphasis on a clear artistic profile: theatre makers who opt for powerful images, impact, the large stage, the grand gesture. For narratives that connect collective histories with possible futures. Toneelhuis theatre makers are given the space to translate their social, political and ecological questions to the stage. They work independently of one another and develop their artistic vision in collaboration with the artistic direction. The line-up of the permanent artistic core with its five diverse makers (FC Bergman, Lisaboa Houbrechts, Gorges Ocloo, Olympique Dramatique, Benjamin Abel Meirhaeghe) testifies to quality and a clear vision. The themes of the productions that have been described to us seem topical and interconnected. The programme certainly arouses curiosity.”

What more could you add to this? This is the essence of how we operate and what we do in a nutshell. This is who we are. What we stand for and what we do. Making an all-out effort. One hundred percent. With the entire company and everyone working at and for Toneelhuis.  We want to realize all of our plans for the coming seasons.

3. We, the theatre makers of Toneelhuis, assume our responsibility.

Now, together with the Board of Directors and with acting Business Manager Koen Roofthooft, we fully assume our responsibility as Toneelhuis makers in this sad crisis. We are firmly united as a group and with that positive energy we are doing everything possible to protect the daily activities of Toneelhuis and to safeguard the future of this company. And what sort of future do we have in mind? This is what we had planned for the 22-23 season, if only in terms of premieres: Olympique Dramatique will work with a group of top actors from different generations on Ibsen’s Vijand van het volk (Enemy of the People). Jaouad Alloul will transform the Bourla into a nightclub and stage a queer punk theatre concert there. In collaboration with LOD muziektheater and Opera Ballet Vlaanderen,  Gorges Ocloo will put together a group of black performers in a rhythmic AfrOpra, The Golden Stool. Naomi Velissariou will turn Tom Lanoye’s Atropa into a techno-tragedy in collaboration with Theater Utrecht and Orkater. Multi-artist Benjamin Abel Meirhaeghe will have a stab at a quirky dance show that turns Western ideals of beauty upside down. With tg STAN, de Roovers and Theater Antigone, Toneelhuis will present About Elly, after the similarly named Iranian film. Jozef Wouters will make the Bourla itself the theme of his new theatrical installation. Lisaboa Houbrechts will make a large-scale theatre/opera narrative with La Geste, Opera Ballet Vlaanderen, Le Phénix in Valenciennes, MC93 in Paris, Opéra de Lille and the Holland Festival.

4. Toneelhuis is part of a large network.

With many visible and invisible threads, Toneelhuis is connected with other theatres and cultural institutes in Antwerp, Flanders and beyond. We have the reputation of being a reliable partner that stands for artistic quality, dialogue and collaboration. Toneelhuis wants to make a difference, both artistically and socially. The field needs big players like Toneelhuis in order to have a healthy ecosystem. Along with KVS and NTGent, Toneelhuis provides a diversified and creative interpretation of the ‘municipal theatre’ concept. Housed in the Bourla Theatre, Toneelhuis is an iconic venue for scores of young theatre makers (the Love at First Sight festival), other companies (the Antwerpse Kleppers festival, venue exchange with KVS and NTGent, collaborations with Tutti Fratelli and Behoud de Begeerte) and many musical bands.  A large part of the artistic budget goes to supporting the productions of other Flemish companies and artists.
Toneelhuis also reaches a wide audience. Each year, we put on 600 to 700 shows for 130,000 to 150,000 viewers. We continue to defend the importance of the grand gesture, on the large stage, for a large audience.  Toneelhuis has an extensive presence at home and abroad. We tour through Flanders and the Netherlands with big shows for a varied public in large and mid-sized theatres. Toneelhuis also excels internationally, from Poperinge to New York, from Adelaide to Mol.

5. Toneelhuis has a long history.

Moreover, Toneelhuis has a rich history. In the first place of course, this is the history of the building in which it is housed,  the Bourla Theatre and its infrastructure. But that history is also the knowledge, experience and craftsmanship of its employees, which is passed on to new employees. Monumental productions like JR by FC Bergman would be impossible to realize without the Herculean efforts of our set workshop, which is unique in the Benelux. A production like Angels in America by Olympique Dramatique would be inconceivable without the knowhow of our technicians. Toneelhuis succeeds again and again in getting the best quality custom-made results out of the most diverse artists. Finally, it is a history of the artists who royally appropriate the Bourla for a while and then move on to make room for a new generation of theatre makers.

The withdrawal of governmental support would mean that some of the artists with us here today might feel compelled to go abroad to realize their artistic dreams and plans. It would mean the end of a wealth of knowledge, interconnections and experience that has been built up over many years.

But our place is here
Our House is here
To be or not to be, that is the question

WE WILL CONTINUE TO BE
WE ARE TONEELHUIS! 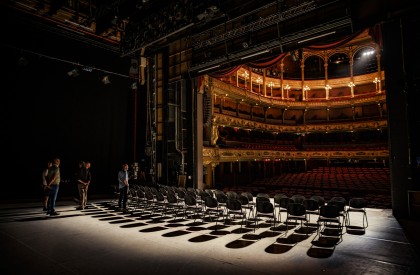 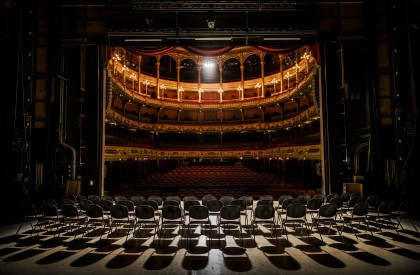 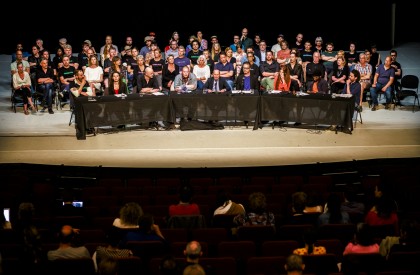 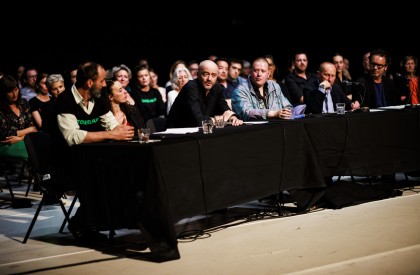 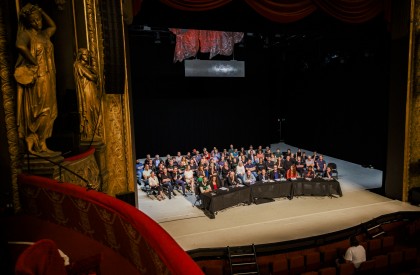 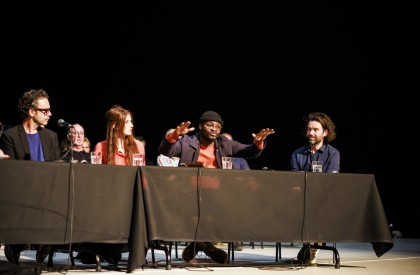 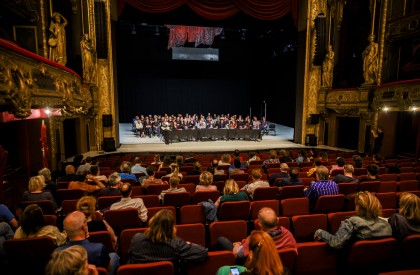 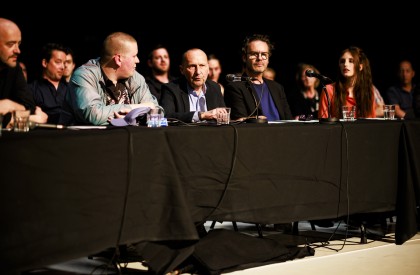 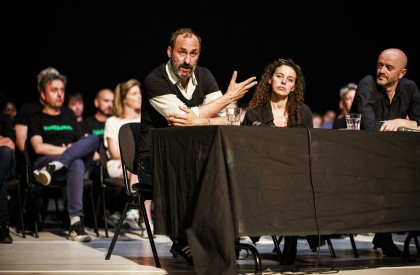 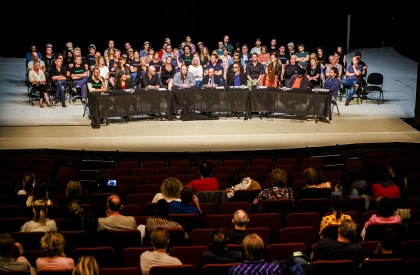 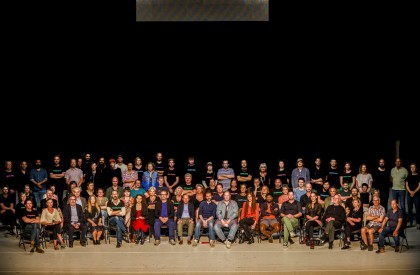