“During these exceptional moments, these ecstatic moments, we are reminded of theatre’s greatness, of its irreplacable humanity.” - Philippe Chevilley in Les Échos, 7th December 2015

One of the most moving mourning poems in Dutch literature by writer Jeroen Brouwers, staged by Guy Cassiers and brought to life on stage by a phenomenal Dirk Roofthooft. Sunken Red is a prayer, litany, elegy, farewell letter, ode, curse, cry of despair, self-pitying lament … all these things in one moving, harsh and poetical narration.

Jeroen Brouwers wrote Bezonken rood (1981) in the weeks following his mother’s death. In 1943, three-year-old Jeroen Brouwers was imprisoned in the women’s Tjideng Camp (now Jakarta) with his sister, his mother and his grandmother. The writer talks about how the camp did permanent damage to his relationship with his mother and how every new love affair breaks down under the weight of that experience.

“Sunken Red is remarkable in every respect. Here Guy Cassiers employs all of the magic of his multi-media, multi-sensory theatre. And then there’s Dirk Roofthooft’s performance, he is an extraordinary actor who descends to the heart of human darkness. Deeply moving."- Fabienne Darge in Le Monde, 4th December 2015

"Theatre can be hallucinatory, like a trip, a dream that lifts you out of your seat. Though that happens only rarely, Guy Cassiers and Dirk Roofthooft managed it in Sunken Red . (…) Roofthooft is a phenomenal actor, but he is not on his own. Aided by sound technology which goes beyond perfection, every breath, every change in his voice is audible. The result is unprecedented subtlety. Even in a large auditorium, you feel the story is being told to you alone."

"Sunken Red is an ode to virtuosity. It is an evening that wreaks havoc on you. May Dirk Roofthooft continue to perform this play to the end of his life!"

"A fantastic performance! This is one of the rare theatre productions where the filmed image does not illustrate, does not distract and does not make the actor disappear either: in fact, the image enhances him and merges with him."

"The director Guy Cassiers and the actor Dirk Roofthooft, both Belgians, adapted the text along with Corien Baart. The result is an extraordinary response to the eternal question of how to deal with the subject of violence in theatre. Without howling or Kalashnikovs, they show a destroyed life by the voice of an actor who is all by himself on the stage. Dirk Roofthooft is powerful, solid, calm and captivating. He simply tells his story, taking his time to pronounce the words, filled with tiredness. Nothing is played, nothing is illustrated. There are only a few video cameras that the actor speaks to, projecting the image of a broken man onto a wall of blinds behind his back, like the face that the personage recognises less and less in the bathroom mirror."

after the novel by 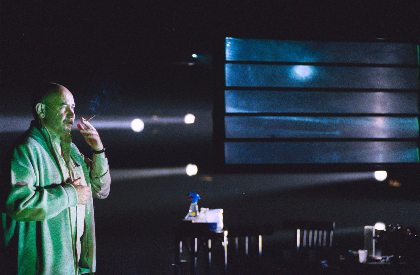 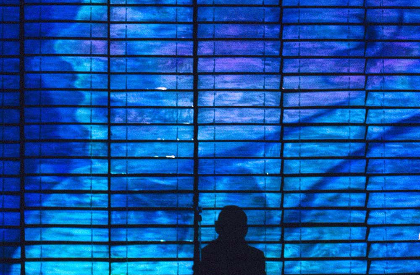 Location
at Toneelhuis and on tour
Duration
1h40

"I perform the script others have written as a camouflage so that the audience doesn’t realize I am talking about myself. The first impression is that Sunken Red is a script by Jeroen Brouwers. But in that one sentence, “I am still standing where my mother told me to stand.”, I recognize myself and the feeling with which I go through life.  "