Deep into the interior of Congo captain Marlow goes to look for Kurtz, a commercial agent. The journey to the horrors of colonial violence is also a journey to the dark abyss of the human soul.

Scrape away the gilding of civilization and we are left only with a dark heart.

Duister hart tells the story of Marlow who, as the captain of a steamboat in the service of a Brussels-based business enterprise, goes deep into the interior of Congo to look for Kurtz, a commercial agent. After an exhausting and deranging search in the forest, Marlow eventually comes across the lost Kurtz, now a physical and moral wreck.

Joseph Conrad’s Heart of Darkness appeared in 1902 at the height of European expansion. The journey to the horrors of colonial violence is also a journey to the plumbless depths of a ‘dark heart’, to the dark abyss of the human soul. The book became widely known when the American director Francis Ford Copolla used it as inspiration for his Vietnam film Apocalypse Now (1979).

Josse De Pauw plays Marlow, but also all the other characters. His search in the forest is a succession of encounters with aspects of himself, until he is also eventually forced to recognize himself in Kurtz’s ‘dark heart’.

“A first-rate production and performance at the service of an impressive script which also says a lot about mankind and society. The result is an awesome piece of theatre.” – Yves Desmet in De Morgen, November 26th 2011

after the novel by

script based on the translation by 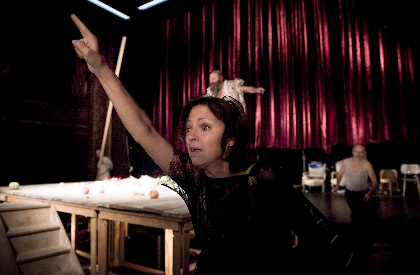