“My love is not my love, I no longer recognize him.”

After Romeo & Julia and Hamlet Symphony, director Mokhallad Rasem has again taken a play of Shakespeare’s as the starting point for a special adaptation. In Othello, he assembles text, images and music into a contemporary fable.</p>

Othello, Desdemona and Iago: the story of two friends and a couple. Jealousy, mistrust and fear gradually destroy their love and friendship. Mokhallad Rasem concentrates on the tension between three people who are being driven apart. The abuse and murder of a person is so much more damaging than a war. Can you really trust a person that you do not know and perhaps will never know entirely?

In a visual, musical production in which doubt, imagination and reality continually interweave, a friendship and a love relationship are cast in a different light.

“This Othello successfully holds the spectator’s attention and makes emotions palpable through music and film. We completely understand what it’s about. It is topical and close to us.” - Eline Van de Voorde on Cobra.b, 29 March 2015

“The play rises above the themes of personal jealousy, discrimination and power, and acquires a political dimension…. With film footage and enlarged projections, a soundscape, restrained acting and live music, Rasem and his actors, dramaturges and the entire team create an atmosphere that despite all of its darkness radiates beauty. An atmosphere that makes a lasting impression. Can we actually live together at all? Should we distrust each other and ourselves? Aren’t we all lying to one another?” –Tuur Devens on Theaterkrant.nl, 27 March 2015 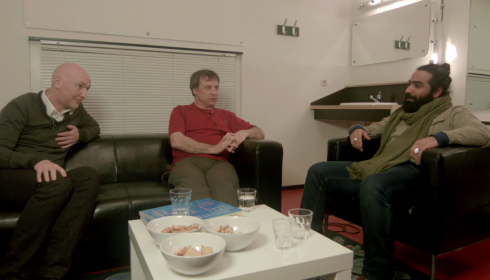